Much is being said and asked about the use of Wireless Emergency Alerts (WEA) to help find the suspect for the recent New York/New Jersey bombings. New York City Mayor Bill de Blasio has publicly bragged on WEA, and said the city will use it again. Some media reports tout this as the first use of WEA for a manhunt. And questions have come up from citizens who want to know why the WEA message didn’t include an image of the suspect. In our opinion, the use of WEA for this particular situation is brag-worthy. Questions About WEA Use in NY/NJ Bombings

Dispatchers are critical members of the first responder community who use their specialized skills and training to save lives and keep communities safe.  However, the Office of Management and Budget (OMB) has recently proposed that the position of “Public Safety Telecommunicator” be classified as an “Office and Administrative Support Occupation.”  Such a classification is more than just grossly inaccurate. It diminishes the vital role dispatchers play and perpetuates a stereotype that impacts the resources available to dispatchers and 911 systems, particularly at a time when rapid technological changes are increasing demands on dispatchers. 911 dispatchers are not clerical workers

FirstNet was in Albuquerque, New Mexico, last week for the National Association of State EMS Officials’ (NASEMSO) Fall 2016 Meeting. FirstNet Board members Sue Swenson and Kevin McGinnis led a meeting and discussion with the NASEMSO Board of Directors. Kevin also presented alongside outgoing NASEMSO President and PSAC member Paul Patrick during a break out session, focusing their remarks on the FirstNet State Plan process and ensuring that EMS stakeholders are active participants. NASEMSO also considered and approved a resolution of support for FirstNet.

Also last week at the Competitive Carriers Association Annual Convention in Seattle, Washington, FirstNet Chief Executive Officer Mike Poth presented an update on FirstNet to an audience of vendors from across the wireless industry. FirstNet also hosted a booth at the conference for the first time. Most attendees were aware of basic information about FirstNet, and their interest focused on FirstNet’s timeline. END_OF_DOCUMENT_TOKEN_TO_BE_REPLACED

On September 27, from 1-2 p.m. ET, join the DHS S&T Office of Public-Private Partnerships in a Facebook virtual town hall to learn and discuss how S&T collaborates with industry. This virtual town hall is an opportunity for industry to provide S&T with feedback on how we can improve our partnership and engagement efforts to make it easier and more efficient to work with us. You can also follow us at @dhsscitech on Twitter for more ways to connect. Follow this link for more details! 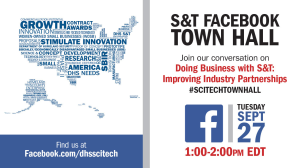 New York City officials sent a special wireless alert to millions of people on Monday asking for their help locating Ahmad Khan Rahami — but they weren’t able include a photo of the suspected bomber. That’s because federal regulations keep emergency alerts, which resemble texts but travel on a separate system, from having web links or photos, something the phone companies say is necessary to avoid overwhelming their systems. Emergency officials want to be able to embed photos and internet addresses linking to more information. Coincidentally, the Federal Communications Commission next week is to consider steps that would expand message formats for at least some emergencies. Read more here:  New York Bombing Phone Alert Couldn’t Share Suspect’s Mug Shot

Radio channels used by local law enforcement and first responders will become encrypted by the end of the year, a Sioux City law enforcement official said Monday.  The change will come as local agencies upgrade radio equipment in order to join Iowa’s statewide radio system by 2017.   Sioux City Police Capt. Marti Reilly on Monday did not specify a date for the change, but he said it has come sooner than expected.  His comments came after the Sioux City Council voted to fast-track the purchase of nearly $2 million in new radio equipment to take advantage of available discounts.  Read more here:  Police: Radio traffic to be encrypted by end of year