Apple is rolling out a new feature in its next iPhone software update to send emergency responders instant, precise location information in the US. The update, coming in iOS 12 later this year, calculates a caller’s location based on data collected from WiFi access points, nearby cellular towers, and GPS. Read complete article here. 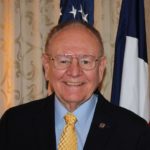 RCA has added a new feature to its website–a short feature on a current member, what they are doing, and what their wireless interests are.  The member that is featured will be changed regularly.  This month RCA honors Chief Harlin McEwen.

Harlin R. McEwen, Chief of Police (Ret)  Chief McEwen brings more than 60 years of experience both as an advocate for public safety telecommunications issues and as a career law enforcement officer and administrator.  He served as a Chief of Police for more than 20 years, last serving as Chief in the City of Ithaca, NY.  He also served as Deputy Commissioner of the New York State Division of Criminal Justice Services and Director of the Bureau for Municipal Police.

Chief McEwen then served as a Deputy Assistant Director of the Federal Bureau of Investigation in Washington, DC.  He provided oversight for new FBI Criminal Justice Information Services such as the National Crime Information Center (NCIC) 2000 Project, the Integrated Automated Fingerprint Identification System (IAFIS), and the Law Enforcement Online (LEO) system.  He also traveled extensively both in the U.S. and internationally speaking at police conferences.  He served as Chair of the Communications & Technology Committee of the International Association of Chiefs of Police (IACP) for more than 36 years until 2015. END_OF_DOCUMENT_TOKEN_TO_BE_REPLACED

The FCC’s Public Safety and Homeland Security Bureau released a public notice today seeking comments on the agency’s network reliability rules, including outage notifications to public safety answering points (PSAPs). Among the questions the bureau asked is whether the agency should weaken the current regulations.

“Under current Commission rules, ‘covered 911 service providers’ are required to: 1) take ‘reasonable measures’ to ensure 911 circuit diversity, availability of central office backup power, and diverse network monitoring; 2) certify annually to their performance of these measures, or to alternative measures demonstrated to be reasonably sufficient to mitigate the risk of failure; and 3) notify PSAPs of outages that potentially affect them,” the bureau noted in the public notice in PS docket 13-75. “When the Commission adopted these rules [TR Daily, Dec. 12, 2013], it committed to review them in five years to determine whether they remain technologically appropriate, and both adequate and necessary to ensure the reliability and resiliency of 911 networks. The Bureau invites interested parties to provide comments and other information regarding how effective these provisions have been in practice, and whether these provisions should be modified to adapt to advancements in technology or other changes. The Bureau will use the record from this Public Notice to recommend next steps, if any, for the Commission’s consideration.” END_OF_DOCUMENT_TOKEN_TO_BE_REPLACED

FirstNet and Interoperability.  During speeches at the recent PSCR meeting in San Diego, two people made points that started me thinking about what lies ahead for FirstNet. The first was the Chair of The FirstNet Authority, Sue Swenson, who talked about FirstNet ending Chapter One on a high note and starting Chapter Two. The second was TJ Kennedy, who announced formation of the Public Safety Technical Alliance (PSTA), a non-profit that has been formed to work with the public safety community, vendors, and others to ensure components for FirstNet (Built by AT&T) meet the open standard mandate put into place by FirstNet the Authority.

Sue talked about the first chapter for FirstNet being a long one for many of us, spanning more than ten years. However, it concluded with the network in place, all 56 states and territories opting in, a large number of public safety agencies joining FirstNet (Built by AT&T), more approved devices coming to market, and momentum that will carry us into Chapter Two. As promised, the network is nationwide, it provides end-to-end encryption, has its own core, and delivers full pre-emption for the first responder community. Chapter Two then will be about what runs on the network and how to maintain full interoperability. The rationale for FirstNet was to provide a coast-to-coast and border-to-border network where vehicles and people could move into other jurisdictions to assist in an incident and not only have a common network but to be assured that what rides on the network in terms of applications, data access, and voice are all fully interoperable.

To this end, TJ Kennedy and a host of others formed the PSTA to work with FirstNet, public safety, vendors, and others to make sure what flows over the network is “operable” for all. However, before we start on Chapter Two, we must first understand that like any broadband network, it will never be truly finished. It will continue to grow, new sites will be added as needed, and it will encompass 5G small cells, the Internet of Things (IoT), and other related purposes for the network. AT&T recently committed $2 billion to building out FirstNet in rural America, which will also enable rural businesses and citizens to gain access to broadband they have never had before. Even after the 25-year contract is over, the network will continue to grow and expand using whatever new technology replaces 4G and 5G.
> Read The Entire Post Here END_OF_DOCUMENT_TOKEN_TO_BE_REPLACED

Apple, Inc., announced today that users of iPhones with iOS 12 will automatically share the location information of the devices when users call 911 beginning later this year.

“Communities rely on 911 centers in an emergency, and we believe they should have the best available technology at their disposal,” said Apple Chief Executive Officer Tim Cook. “When every moment counts, these tools will help first responders reach our customers when they most need assistance.” END_OF_DOCUMENT_TOKEN_TO_BE_REPLACED

FCC Commissioner Mike O’Rielly today renewed his call for Rhode Island to stop diverting 911 funds for other purposes. In a letter to Rhode Island Gov. Gina Raimondo (D.) and House Speaker Nicholas Mattiello (D., 15th District), Mr. O’Rielly asked the officials to “restore the sanctity of 9-1-1 fees within the state.

“In April, I read comments by both of you, and received a personal commitment from Governor Raimondo indicating support for ending the state’s longstanding diversionary practice. I was heartened by this response, believing that with the support of both of you, as well as Republican State Representative Bob Lancia, there appeared to be a unique opportunity to explore the proper and necessary range of options to get this accomplished. Unfortunately, it seems my hope for a quick correction was misplaced,” Mr. O’Rielly said.

“Specifically, I have just reviewed the pertinent section of the latest version of the Rhode Island budget made available, and, it seems to vastly miss the mark,” Mr. O’Rielly complained. “Instead of ending the practice of 9-1-1 fee diversion, it appears that the state plans to paper over its practices by changing the name of the consumer E911 charge. While this may alleviate the deception imposed on your citizens, it does nothing to address the funding needs of you 9-1-1 call system. To put it bluntly, your state is diverting 60 percent of the funds intended and necessary for public safety purposes to your general fund, and no amount of relabeling will resolve this reality.” END_OF_DOCUMENT_TOKEN_TO_BE_REPLACED

The board of the First Responder Network Authority (FirstNet) and its four committees plan to hold a joint meeting next Wednesday from 10 a.m. to 1 p.m. ET. The meeting will be held via teleconference and WebEx. The public can listen by dialing 1-888-324-9653 and using passcode 4609182. To view the slide presentation, the public can visit https://www.mymeetings.com/nc/join/ and enter conference number PWXW7524794 and audience passcode 4609182.

The FCC’s Public Safety and Homeland Security Bureau released a public notice today to launch a review of the adequacy of the voluntary Wireless Network Resiliency Cooperative Framework. The public notice also seeks comments for a study on providing the public access to 911 services via Wi-Fi and other technologies.

“The devastating 2017 hurricane season provided insight into how wireless providers react to varying levels of damage to their wireless networks and how they cooperate after disasters. The Public Safety and Homeland Security Bureau (Bureau) is currently working with providers, public safety officials, and others to determine what lessons may be learned from the past season to better prepare for future emergencies. By this Public Notice, the Commission further complements its ongoing analysis of network resilience during and after the 2017 hurricanes and lays the groundwork for improved wireless network resiliency in the future,” the bureau said.

“We believe this is an opportune time to review the overall efficacy of the Wireless Network Resiliency Cooperative Framework (Framework). Since its initiation in 2016, the Framework has provided a systematic approach to enhancing coordination during disasters to protect the reliability of wireless networks. Our goal is to ensure that this voluntary industry commitment to promote resilient wireless communications and situational awareness during disasters is robust and effective. Therefore, the Bureau seeks public comment on potential methods of measuring the effectiveness of the Framework, determining the extent of the Framework’s use, and further promoting awareness of the Framework,” the public notice added. “We also seek comment on ways to further facilitate improvements to the Framework, including by soliciting voluntary commitments from backhaul providers to address processes and best practices for information sharing for network restoration and coordination during disasters.”

The public notice also said that “pursuant to Title III, Section 301 of RAY BAUM’S ACT, we seek comment on a future Commission study that will address the public safety benefits, technical feasibility, and cost of providing the public with access to 911 services during times of emergency via Wi-Fi access points and other technologies, when mobile service is unavailable.” END_OF_DOCUMENT_TOKEN_TO_BE_REPLACED

The Senate late yesterday confirmed Christopher Krebs as undersecretary–national protection and programs at the Department of Homeland Security.  As senior official in DHS’s National Protection and Programs Directorate (NPPD), Mr. Krebs had been performing the duties of the vacant post.  He previously was director–cybersecurity policy at Microsoft Corp. and worked at DHS as a policy adviser during the George W. Bush administration.  Sen. Ron Wyden (D., Ore.) recently dropped a hold he had placed on Mr. Krebs’s confirmation over DHS’s withholding of information regarding the use of cell-site simulators (TR Daily, May 24).

The House Energy and Commerce Committee’s digital commerce and consumer protection subcommittee today approved the State of Modern Application, Research, and Trends of IoT Act (SMART IoT Act) (HR 6032).  The bill, which was introduced by subcommittee Chairman Bob Latta (R., Ohio) and Rep. Peter Welch (D., Vt.), would direct the Commerce Department to produce a study on the state of the Internet of things (IoT) industry in the U.S. (TR Daily, May 22).